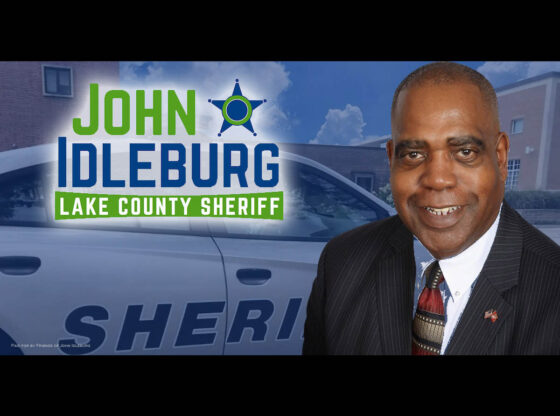 Lake County Sheriff John Idleburg is running for re-election in the Democratic primary to take place on June 28th. The incumbent will complete his first full term this year and is eager to continue serving. Idleburg has a solid set of accomplishments which stand as a foundation of his campaign. In 2018, Idleburg won over now former Sheriff, Mark Curran. John has been making a difference ever since being sworn in.

Idleburg ran in 2018 on increasing the level of trust between the community and officers working for the Sheriff’s office. He took clear and solid steps to make that happen.

Under Idleburg’s leadership, the Lake County Sheriff’s Office was one of the first law enforcement agencies in our region and in the state Illinois to implement a duty to intervene. He took this step before it was legally required under the SAFE-T Act that just passed in the General Assembly. The duty to intervene requires law enforcement to take action when they witness another law enforcement officer applying excessive force upon another individual.

He also worked hard to insure that the men and women of the Sheriff’s office have the training and resources they need to effectively serve our community.

When Idleburg was sworn in, all eight collective bargaining units had expired contracts and it had been years since those contracts expired with no end in sight. The new Sheriff was able to negotiate and settle the outstanding contracts and developed strong collaborative relationships with the unions that represent over half of the LCSO employees.

Under his leadership, the Sheriff’s Office has been highly dedicated to public safety. Idleburg dedicated resources to aggressively pursue trafficking in all its forms (guns, human, drugs), the Special Investigations Group has set new records and as of this year, the unit seized nearly $10 million worth of illegal drugs and over 200 illegally possessed firearms, which resulted in a total of 350 felony charges.

Sheriff Idleburg works diligently to remain visible and accessible. He is a fixture in our community and is frequently seen at events throughout Lake County. His first term as Sheriff covers a challenging time in our nation between the pandemic, societal challenges and economic dislocation. He stood up to all of those challenges and the job grew with him.

John went to high school in Zion and joined the Marine Corps after graduating. Those principles he learned as young Marine… taking responsibility, leading by example, working as a team and establishing clear objectives, have served him well in his law enforcement career. He brought those same ideals to his job as Lake County Sheriff, and it shows in the results.