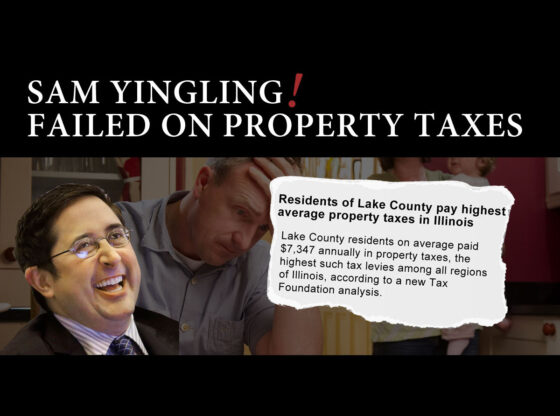 Sam Yingling ran as the “tax cutter” in 2012 and has delivered absolutely nothing. Instead he has been demagoging the issue ever since. It is no secret that elections have consequences. Promises made and promises broken have real consequences for our lives. It is imperative to consider who has done right by us, who has not and then vote accordingly.

Despite his promises, our property taxes have steadily risen. Throughout the past ten years, residents have been bombarded with endless streams of slick mailings, digital ads and streets festooned with “tax cutter” branded yard signs.

Instead of delivering real solutions, Sam has pursued media initiatives such as electing the Lake County assessor. The measure failed and would have done nothing to actually lower property taxes as the real problem involves pension debt and the way we fund schools. The initiative was great for Sam’s PR but did nothing for those of us Democrats who put our confidence in him and voted yes to Sam over the years.

As recently as 2019, Yingling headed up a property tax relief force proclaiming, “Introducing anything less than a substantial overhaul will not be tolerated by the public.” He delivered absolutely nothing.

In an article by the Chicago Tribune editorial board it urged, “Voters, don’t swallow campaign snake oil.”

We agree fully. As state representative Sam Yingling has been doing nothing but selling us snake oil. We gave him a chance and ten years to deliver. Now it is time to hold him accountable. Please vote NO to Sam Yingling and YES to accountability. As Democrats, we deserve nothing less.