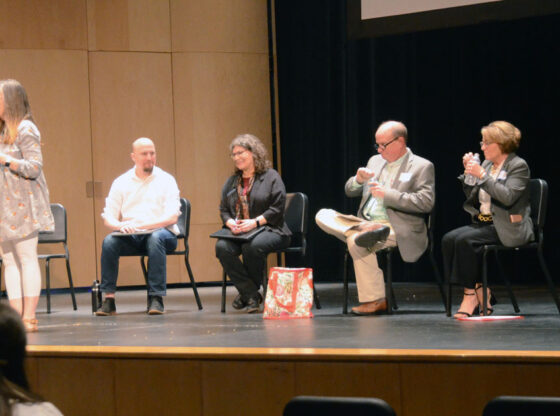 On Saturday, the citizen activist group Indivisible Western Lake County held a candidate forum at Lakes Community High School. The event was well attended with the majority of Lake County Democratic candidates in attendance. The event was at times contentious as is common in primary races.

The event was opened with words by Ester Hebbard of IWLC. She explained that the police presence outside of the high school was due to some threatening emails having been sent to the group in opposition to gathering. It is unfortunate for anyone to send such messages because of a partisan political opinion.

This was not a debate and instead was a forum where each candidate was afforded 3 minutes to address the crowd.

The first round of speakers included Lake County Board candidates Michael Leone, Brian Hayden, Shawn Killacky and Linda Troester. So far, killackey is the only one who maintains a campaign website which can be viewed at www.votekillackey.com

Sheriff candidates John Idleburg and William King both spoke about improvements they intend to bring to the office. Incumbent Idleburg has a had a successful time as Sheriff and spoke of the multiple changes he has already brought since being sworn in.

Illinois Supreme Court candidates were all present which includes Nancy Rotering, Elizabeth Rochford and Rene Cruz. Rotering was recently kicked off of the ballot stemming from a petition challenge. During her three minutes, she spoke about her imminent appeal.

There were contentious moments during the event as well.

State Senate District 31 candidates Sam Yingling and Mary Edly-Allen were both in attendance. Yingling is a current state rep who spoke about his claimed advocacy for women as well as positive changes he feels he has made for the district. To the roar and approval from the crowd, Edly-Allen cited her work on women’s issues during her time in the general assembly. More about Yingling can be found at www.samyinglingforsenate.com.

Similarly contentious was the segment dedicated to candidates for state central committee. In attendance were tenth district incumbents Lauren Beth Gash and Tom Maillard as well as challengers Melinda Bush and Hal Sloan, both of Grayslake. Gash spoke about her experience and time fighting to elect Democrats. Maillard also spoke about his successful efforts to help elect Democrats as well as him being the youngest committeeman in Illinois. Candidate Sloan talked about how he became involved in politics and cited his serving as Avon Township Democrats chair. State Senator Bush who is retiring from the general assembly and now running for committeewoman said she respected her opponent’s service and cited what she believes are failures on the part of the central committee, implying local members Gash and Maillard. Her words brought scowls from the two incumbents.

It is rare to see heat around state central committeeperson races, but expect more.

Please Join County Commissioner Wasik and Others at Rollins Savanna This Saturday
Dana A. Dingman Gets Probation