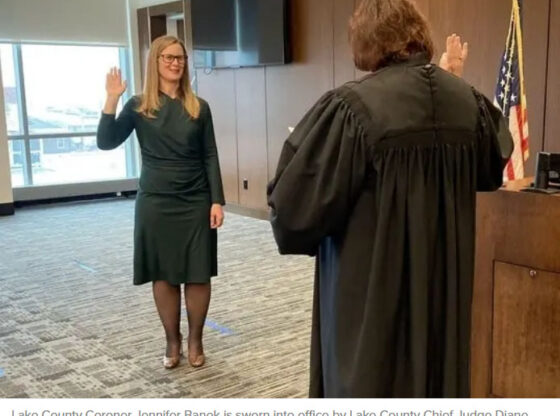 WAUKEGAN, IL — A new elected official is in charge of investigating and determining causes of deaths in Lake County.

Banek, a Green Oaks Democrat and nurse anesthetist, defeated Howard Cooper, a Wadsworth Republican and forensic dentist, by 53 percent to 47 percent and a margin of nearly 20,000 votes, according to official results from the Lake County Clerk’s Office.

“I am honored by the support I’ve received from the voters of Lake County, and eager to get to work as Lake County Coroner,” Banek said in a statement. “I look forward to being an advocate for all of Lake County’s amazing communities as we get through the pandemic and other challenges.”

As a certified registered nurse anesthetist, Banek provides anesthesia ahead of surgery to patients in Illinois and Wisconsin.

The new coroner is also a captain in the U.S. Army Reserve, having been most recently deployed to Al Udeid Air Base in Qatar to provide anesthesia to military personnel before surgery. She returned in January 2019.

In April 2019, Banek won a seat on the Cook Memorial Library Board in her first run at elected office, receiving the most votes of any of the six candidates competing. She serves as its board secretary.

Banek was one of four Democrats who swept countywide offices in Lake County in the Nov. 3 general election.

Since 2018, Democrats have gained a majority on the Lake County Board, as well as the offices of sheriff, state’s attorney, treasurer, county clerk, circuit court clerk and coroner.

The coroner’s office is responsible for investigating and determining the circumstances of all deaths suspected of being unnatural, as well as natural deaths of people not under licensed medical care.

State law calls for the coroner to go to the scene of any such death to lead the preliminary investigation. In any apparent accident, suicide or homicide, a coroner may also convene a jury of six people to conduct an inquest to determine which one was the manner of death, according to state law.

In Illinois, coroners can be elected or appointed, while medical examiners are appointed. Being a coroner in the state requires 40 hours of training that must be completed within seven months of taking office. Cook County is the only county in Illinois with a medical examiner, an appointed position with required qualifications in forensic pathology.

The coroner’s office staff issued a statement Tuesday thanking Cooper for his four years of service.

“We appreciate his many accomplishments toward improving the office and his dedication to the county’s residents,” it said. “He has been an integral part in our many achievements and ongoing commitment to serving Lake County. He will be missed in the years to come.”

Cooper, Banek’s predecessor, was elected coroner in 2016 in his second run at the office after the incumbent Democrat Thomas Rudd was forced off the ballot by challenges to his nominating petitions during the primary.

In February 2017, Rudd was indicted by a grand jury on five counts of perjury after prosecutors said he was lying when he signed five pages of signatures that he had not collected.

But in September 2017, the special prosecutor assigned to the case to avoid a conflict of interest in Lake County, former LaSalle County State’s Attorney Brian Towne, was himself indicted on 17 counts of official misconduct and his replacement quit for personal reasons, leading to delays in the case.

Rudd would go on to plead guilty to reduced misdemeanor charges of disregarding the election code in March 2018 in exchange for agreeing to a five-year ban on public office. His lawyer claimed the former coroner’s prosecution was politically motivated retaliation for challenging politicians and corrupt law enforcement officials.