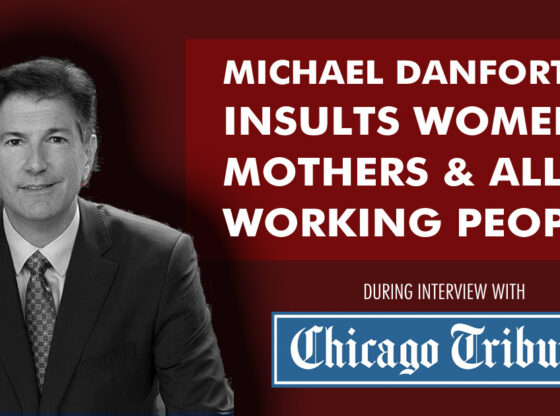 Michael Danforth is an attorney and weapons importer who was appointed to fill the vacancy of the ill-fated former State Representative Nick Sauer. Sauer was arrested and convicted of “catfishing” men on Twitter. Now running for re-election, Danforth made a variety of denigrating comments during an interview with a reporter from the Chicago Tribune. In that narrow amount of time, he managed to insult stay at home mothers, women in general, people who work for a living, everyone who earned non-law degrees and talking to voters.

Insulting Working People
In the discussion, Danforth offered, “It hurts Joe Lunch Bucket, who’s out there on the roads every day having to drive from Waukegan to Chicago, or Waukegan to wherever he works, driving an old gas-guzzling car.” His use of the term “Joe Lunch Bucket” hardly gives working people the dignity deserved.

Danforth also seems to believe there are no working people anywhere in Lake County except for Waukegan. Danforth occupies the seat for District 17 which is home to many hard working people who are not attorneys or weapons importers. Instead they are construction workers, nurses, retail workers, craftsmen, first responders and chefs… people who keep things running. He does not appear to recognize or value this reality.

Insulting Stay at Home Mothers and Dismissing Talking to Residents
Referring to his opponent, Danforth actually said, “admitted she’s basically a stay-at-home mom, and she doesn’t have anything better to do than go knock on doors, I guess.” There is exactly zero wrong with being a stay at home mom. It is shocking that Danforth would consider this to be something to “admit.” Right in the district he is supposed to represent, there are literally thousands of women who are dedicated to raising their children.

His opponent Alicia Timm, who in addition to raising a family with her husband, has been working hard talking to voters throughout the district neighborhood by neighborhood. Throughout this campaign, Timm has knocked over 4000 doors. “The thoughts of the people in our community are important to me,” said Timm. “I enjoy talking to each and every person, and appreciate ALL of the discussions. Once elected, I will continue that dialog as listening is the foundation of effective representation.”

Disparaging Non-Law Degrees and Further Insult to Women
It is surprising how much time Danforth placed in making condescending statements about his opponent during the interview, but added even more with, “She may have a liberal arts degree in college or something, but what skill set? What life experience do you have to be working in this? Have you negotiated contracts? Do you know anything about the law? Do you know how the real world operates?”

Timm is a mother, a wife and has worked in retail for 16 years after earning a college degree. To most people, those are accomplishments and responsibilities that represent working America. That is ample life experience. Too many politicians are aging attorneys while not enough are working people who can effectively speak for the challenges the rest of us face. The comment, “do you know how the real world operates” is insult that is beneath dignity and speaks for itself.

Danforth’s Weak Explanation About His Gun Business
As we reported, Michael Danforth admittedly runs a weapons importation business under the name, “Strategic Defense Imports, Inc.” This does not appear on his candidate statement of economic interest, his official bio on the county board website, his campaign website or campaign materials. It was not until our reporting that Danforth acknowledged his gun business.

In the interview, Danforth claimed, “I personally maintain, as part of my law practice, a Federal Firearms importation license. I’ve had it for 22, 23 years, so I can help people that want to bring ammunition into their wholesaling outfit, their gun store or whatever. I don’t sell to gun stores.”

His statement appears to only address the FFL, not the business entity. While Danforth claims it is part of his law practice and he doesn’t sell to stores, there are boxes of munitions and barrels of guns branded with his company name, Strategic Defense Imports, which is not the name of his law practice. If he only facilitates paper work, why is there a different business entity name he owns branded on weapons and munitions boxes? His explanation to the reporter does not answer the question.

Danforth Thinks He is Better Than Working People and Women. He is Unfit For Office.
Danforth told us who he is through his commentary. He showed his stunning sense of entitlement and his undeniable condescension towards working people and women. By consequence of his own statements, he thinks elected officials should come only from occupations such as law. Working people, mothers and women in general need not apply.

Danforth also clearly expressed his belief that knocking on doors to talk to the people of our community is for people who “have nothing better to do.” If he were to actually spend time meeting with the community, maybe he would realize that so many are hard working people and mothers who bring valuable perspective and do indeed know “how the world works.”

This country is founded on the principle of citizen led government. Instead of accepting this ideal, attorney and weapons importer Michael Danforth has demonstrated disagreement and feels he is above the rest of us. As he doesn’t value all of the people of this community, he cannot continue occupying the seat. Tell him NO in this election.