Canine Duke Takes Down Another Suspect 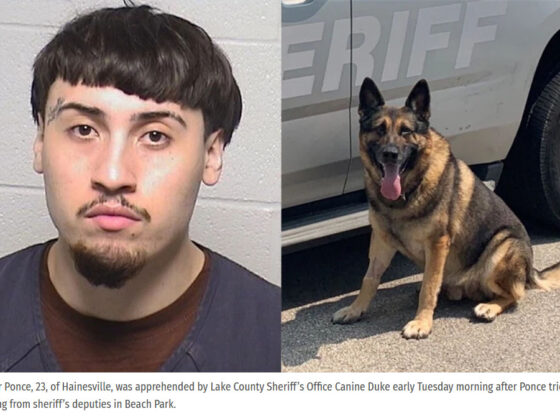 One of our excellent Lake County Sheriff Department canine officers has again nabbed a suspect. In this case, it was Duke who took down an offender attempting to steal catalytic converters at a car lot.

The suspect likely did not count on being on the wrong end of the dedication and skill of one of our canine officers.

The Sheriff’s office responded to a call around 12:15am at a car lot in Beach Park on Green Bay road. Deputies spotted a man who was originally underneath a car. He got up and fled as soon as he determined that he was being approached. The deputies called in for a canine and it was Duke who arrived with his handler.

It did not take Duke long to chase down the suspect. He bit Ponce on the hand and kept him subdued until the deputies arrived.

The suspect was identified as Oscar Ponce, 23, of Hainesville. Deputies found a set of tools at the car lot including jacks and cutting tools, which are commonly used in catalytic converter thefts. Ponce was evaluated onsite by parademic for injuries to his left hand and then taken to the Lake County Jail.

Ponce is charged with possession of burglary tools, theft, criminal damage to property and resisting arrest. His initial court hearing is to be held on Tuesday morning.