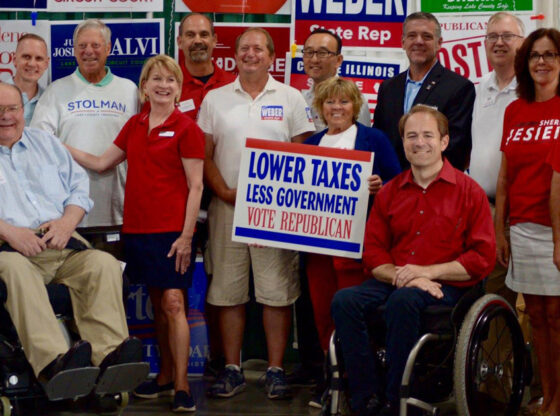 On his Facebook page, Lake County Board Member Dick Barr stated that he will not seek re-election to another term. In his post, Barr said that he believes that his seat will be eliminated during the coming re-districting process. Though it is not certain, he is making his announcement in order for someone else to have plenty of time to run if they chose to do so, according to his post.

Barr was very much a contrarian voice on the Lake County Board.

In his post, Barr cited his knowledge of Robert’s Rules that won a victory for the taxpayers by getting rid pensions for part-time County Board Members. He also referred to his opposition to the gas tax hike, protection of video gaming establishments in un-incorporated Lake County, push for a flat tax levy and what he calls an “unreasonable cancellation of Civil War Days.”

In his post, Barr also offered a scathing rebuke of many of his colleagues. In particular, he cited the controversy surrounding the Vice Chair who improperly dealt with a resident over a negative Facebook. Barr incorrectly characterized the resident as “an elderly Hispanic.” The resident is not elderly and it is doubtful that his being Hispanic had anything to do with his improper treatment. The Vice Chair is elderly and likely does not have a firm grasp of how Facebook works. We eagerly support free speech which is all that the resident was doing. Her actions were clearly wrong and cost us taxpayer’s money. Barr should however have been a bit more exacting in his references.

He went on to state that there is “NO honor in what the Lake County Board does.” We do not agree with that. It is fine to disagree and sometimes feel that an action was done without honor, but no honor?

Barr thanked supporters for the opportunity to serve. He also offered, “PEOPLE should be honorable… TITLES should not be.” That is something with which we agree fully. 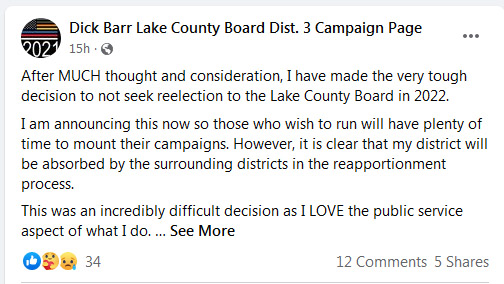