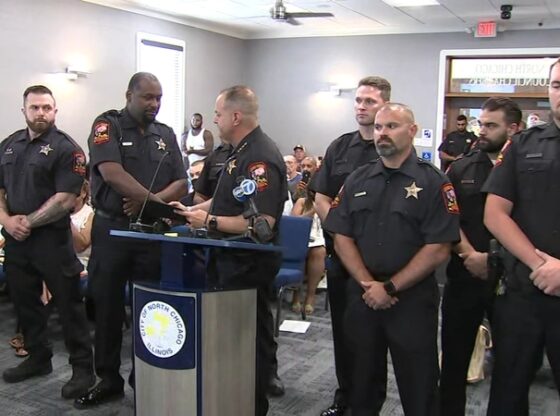 “It’s still surreal,” said Officer Gary Grayer. “I think everybody on that scene was just happy that this guy was taken into custody.”

Grayer was the first to get the call after a driver on southbound Route 41spotted a 2010 Honda Fit allegedly driven by Crimo.

“I think I had to do a double take,” Grayer recalled. “I thought first, oh, that’s not the vehicle and then I…confirmed the plate. Confirmed the Honda Fit with the rear damage. Everything was just like falling into place. All of the pieces was coming together.”

“Is he going to comply? Or is he going to go out shooting? I was already mentally and physically prepared to engage the subject if I needed to,” he said.

Thankfully Crimo, who allegedly had a high-powered rifle and 60 rounds of ammunition in the car, complied.

“Once he got to the ground, we all moved in, and I was the one that put the handcuffs on him,” said Officer Corey Collum.

The North Chicago City Council presented the six officers and one detective with letters of commendation.

“It could have went a different way. There could have been another possible shooting right then. But through the leadership of our department and our chief and their training, they were able to subdue him without any incidence, and I’m very glad to see that,” said North Chicago Mayor Leon Rockingham, Jr.

Rockingham said following that arrest, the city received numerous calls and emails from grateful residents. While seven officers are being honored, the mayor said their actions are a testament to the hard work his officers do every day.