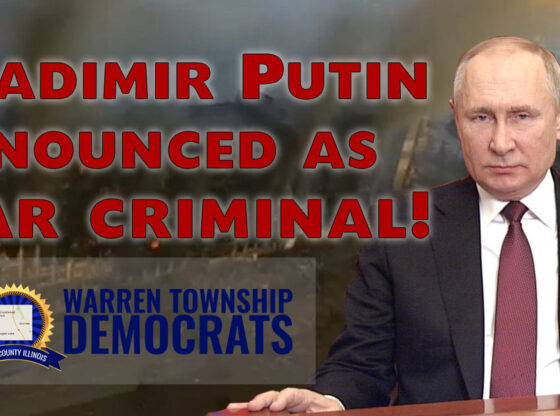 The Warren Township Democrats have declared Russian President Vladimir Putin as a war criminal arising from his illegal attack on the sovereign nation of Ukraine. Citing his ongoing willful attacks on civilians and civilian structures, the group passed a resolution condemning his actions and urging the Hague to begin the prosecution process. The USSR is a signatory to the Geneva Convention are bound by its rules.

On behalf of the organization, Chairman Jim Neel said, “Along with the rest of the free world, our group is deeply troubled by the murderous actions of Vladimir Putin. Myself and some of our members are veterans who stood up for Democracy and for our Nation. Some even worked directly against Russia in the course of their service. Together as the Warren Township Democrats in Lake County Illinois, we wanted to express our most sincere and heartfelt condemnation of Putin.”

From the Warren Dems’ release…

WHEREAS, the Members of the Warren Township Democrats respect and support the ability of people throughout the world to enjoy full freedom and live in the absence of aggression; and

WHEREAS, the Members of the Warren Township Democrats actively support free Democratic elections which form the foundation of self-governance and sovereign nations; and

WHEREAS, Russian President Vladimir Putin with zero threat, provocation, or cause, initiated an invasion of the sovereign nation of Ukraine, comprising a violation of international law as set forth under Article 147 of the Geneva Convention; and

WHEREAS, the USSR ratified the Geneva Convention in 1954 and remains a signatory, thus agreeing to be bound by its tenets; and

WHEREAS, under the direction and responsibility of Vladimir Putin, Russian military forces intentionally and repeatedly shelled civilian dwellings, shelters, hospitals, museums resulting in the total destruction of many thousands of structures in violation of international law; and

WHEREAS, under the direction and responsibility of Vladimir Putin, Russian military forces intentionally and willfully targeted civilians and members of the media with airborne missile, land based missiles, tank munitions and small arms fire resulting in thousands of deaths; and

WHEREAS, Vladimir Putin’s action are contradictory to life and liberty and comprise a clear violation of international law, the Members of the Warren Township Democrats urge the International Criminal Court in The Hague to begin preparing a case and initiate a warrant for his arrest; and

WHEREAS, the Members of the Warren Township Democrats value life and support Democracy throughout the world, we denounce in the strongest terms the disgraceful actions of Vladimir Putin.

RESOLVED BY THE MEMBERS OF THE WARREN TOWNSHIP DEMOCRATS IN THE STATE OF ILLINOIS, that Vladimir Putin is a war criminal and he is denounced as such for his anti-human, anti-democratic criminal actions.