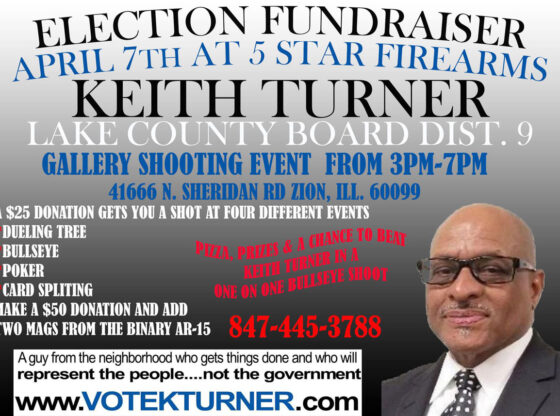 Keith Turner of Waukegan recently filed his nominating petitions to run against Mary Ross Cunningham for Lake County Board. The district 9 seat represents Waukegan and parts of North Chicago. Turner is running against incumbent Cunningham in the DEMOCRATIC primary, yet his first fundraiser is being held at a gun range.

At a time when this country has well over 300 million guns within it and violent crime is increasing, Turner’s fundraiser at 5 Star Firearms in Zion offers attendees the chance to engage in “dueling tree, card splitting and bullseye.” For the $25 entrance fee, attendees get the chance to beat Turner in a one on one bullseye shoot. A $50 donation gets “two mags from the binary AR-15.”

It is worthy to note that the AR-15 is a weapon that is quite popular with mass casualty attackers such as those that occurred in Las Vegas, Aurora Colorado and Newtown Connecticut where 26 children were killed by Adam Lanza at Sandy Hook Elementary.

This event strongly suggests that candidate Keith Turner is out of touch with the party in which in he is running. It stands to reason that he really doesn’t share its values. Some have known this about him for a long long time.