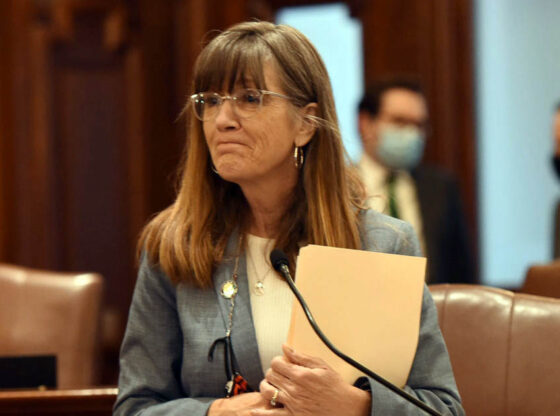 Today, State Senator Melinda Bush announced she will not seek re-election to the Illinois State Senate. First elected in 2012, Senator Bush has built an unparalleled record of fighting for women’s rights and equality in Illinois, from enshrining women’s reproductive health rights into law to passing strict anti-harassment protections and advancing women running for elected office at all levels of government.

“Serving the residents of the 31st District for the last nine years has been the honor of my life. It’s not a place I ever expected to be, but I’m so grateful to all of the amazing people I’ve met as I have traveled across our district and our state working to make Illinois a better place for all who call it home,” said State Senator Melinda Bush. “I’m immensely proud to have helped advance policies that have moved our state forward: making Illinois the most pro-choice state in America; passing landmark legislation to make Illinois a global leader in the fight against climate change; changing the way our state funds education to ensure all students, regardless of zip code or economic status, receive a quality education; and so much more. While I will not be seeking re-election, I will remain an engaged voice on behalf of my community and am committed to lifting up the voices of women throughout Illinois.”

Senator Bush has successfully championed women’s rights and equality throughout her time in office. She was the chief sponsor of the Reproductive Health Act in 2019, which ensures abortion will remain legal in Illinois if Roe vs. Wade is overturned at a time as states across the country continue to enact restrictive abortion policies. She also led efforts to ratify the Equal Rights Amendment in Illinois, an important step toward bringing equal justice to women.

At the height of the #MeToo movement, Senator Bush chaired the bipartisan Senate Task Force on Sexual Discrimination and Harassment Awareness and Prevention. The task force resulted in the passage of some of the strictest sexual harassment and discrimination protections in the country, keeping Illinoisans safe for decades to come and fundamentally changing both the way the legislature and private businesses operate in the state of Illinois. As a member of the Anti-Harassment, Equality and Access Panel, Senator Bush traveled across Illinois and heard women tell their stories about sexual harassment, discrimination, and the way political parties excluded them from the process. As a result, she started the Lake County Democratic Women, which has trained, supported and funded more than 45 Lake County women at the state and local level in the last five years.