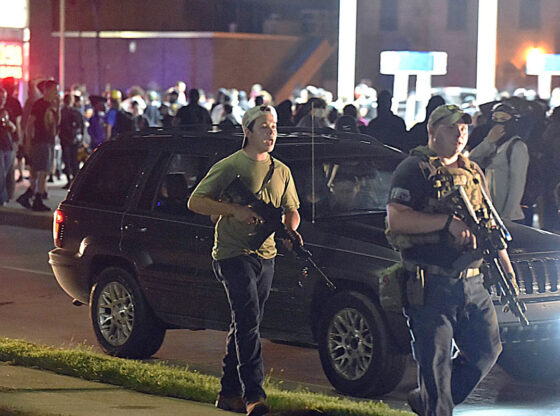 KENOSHA, Wis. (AP) — An Illinois man who shot three people during a protest over police brutality in Wisconsin last year was justified because the men confronted him and two of them tried to wrestle his gun away, a use-of-force expert called by the defense testified at a pretrial hearing earlier this week.

The expert, John Black, spent hours outlining the moments that led to Kyle Rittenhouse’s decisions to shoot Joseph Rosenbaum, Anthony Huber and Gaige Grosskreutz, offering a preview of the defense team’s strategy when Rittenhouse’s trial begins next month. Black testified that video shows Rosenbaum chasing Rittenhouse and reaching for the teenager’s gun, Huber attacking Rittenhouse with a skateboard and trying to wrestle away his gun, and Grosskreutz running at him with a pistol in his hand.

“A citizen in that position, given those indicators, would it be reasonable for them to believe they were about to be assaulted?” Black said. “I would argue yes.”

Rittenhouse was 17 years old when he made the short trip from his home in Antioch, Ill., to Kenosha on the night of Aug. 25, 2020, in response to a call from a Kenosha militia to help protect businesses from protesters. The city was in the throes of several nights of chaotic demonstrations sparked by a white police officer’s decision to shoot Jacob Blake, a Black man, during a domestic disturbance. The shooting left Blake paralyzed from the waist down.

Shortly before midnight, Rittenhouse shot Rosenbaum with an AR-style semiautomatic rifle in the parking lot of a used car dealership, killing him. Moments later, he shot Huber in the street, killing him as well. Seconds after shooting Huber he shot Grosskreutz, wounding him in the arm.

Prosecutors have charged Rittenhouse with multiple counts, including homicide, attempted homicide and being a minor in possession of a firearm. Rittenhouse’s attorneys say he fired in self-defense. His trial is slated to begin Nov. 1.

Rittenhouse’s lead attorney, Mark Richards, is trying to persuade Kenosha County Circuit Judge Bruce Schroeder to let Black testify at the trial. Schroeder allowed Black to speak at the hearing via Zoom in hopes that would help him make a decision.

Black testified that he studied bystander video of the three shootings extensively. He noted that Rosenbaum was chasing Rittenhouse and threw a plastic bag at him before reaching for Rittenhouse’s rifle.

“Now the firearm is a potential weapon for both parties,” Black said. “Now we have a potential wrestling match.”

Bystander video showed that after Rittenhouse shot Rosenbaum, he ran down the street. At one point he stumbled and a man came out of the crowd and kicked him in the face, Black said. Rittenhouse fired at that man but missed.

A moment later Huber hit Rittenhouse in the neck with a skateboard and tried to grab Rittenhouse’s rifle, prompting Rittenhouse to shoot him, Black said.

Grosskreutz approached with his hands raised in an “I surrender” motion but he had a handgun in his right hand. He backed up before he stepped forward and lowered the pistol. Rittenhouse then shot him in the arm.

Black said Rittenhouse maintained control of his rifle throughout and didn’t just spray the crowd randomly with bullets.

Assistant District Attorney Thomas Binger argued that Black is an expert in the use of force by police, not civilians. He also questioned whether Rittenhouse would have been justified in using lethal force if he hadn’t had a gun.

Black responded that he has taught civilian self-defense courses and that Binger was presenting a hypothetical situation. But if Rittenhouse hadn’t been armed with a gun, he may not have been justified in using deadly force, Black said.

Schroeder held off on deciding whether Black can testify at the trial until he hears testimony from a prosecution expert on the use of force. He scheduled an Oct. 25 hearing for that testimony.

The judge began the hearing by denying a defense request to drop the weapons possession charge against Rittenhouse. Wisconsin law prohibits anyone under age 18 from going armed, but Rittenhouse’s attorneys argued that statutes actually prohibit minors only from carrying short-barreled rifles and shotguns. The only other prohibitions on minors possessing firearms lie in hunting statutes, and all they say is that children under age 12 can’t hunt with firearms, they said.

Schroeder said he might revisit the question later, calling the statutes unclear.

He also denied the prosecution’s request to bar the media from broadcasting or publishing images of witnesses’ faces during the trial. The prosecutor told the judge that some witnesses fear for their safety because it’s such a high-profile and contested case.

Richards said he didn’t know which witnesses Binger was referring to, but he pointed out that one prosecution witness has boasted on his social-media accounts about being subpoenaed in the case.

Schroeder said he wasn’t sure if he has the authority to censor the media. He added that he has presided over other cases that he described as more “tense” than the Rittenhouse proceedings.

Many conservatives have flocked to support Rittenhouse, calling him a patriot for seeking to stop violent protests, making him a symbol for gun rights and raising $2 million for his bail. Others, including some liberals and activists, portray him as a domestic terrorist and say he made a volatile situation worse by bringing a rifle to the streets of Kenosha.